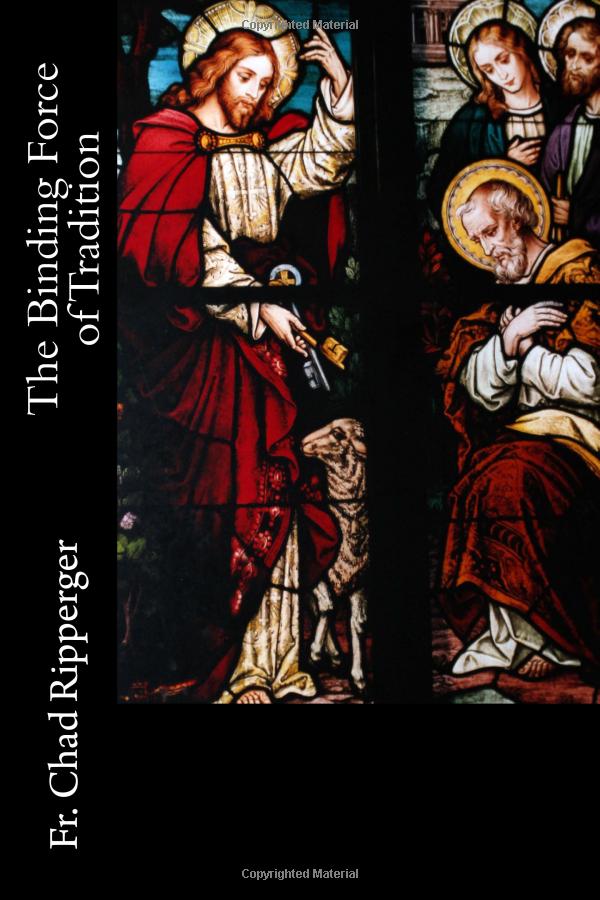 The Binding Force of Tradition

A clear and concise statement of principles on the tradition and our duties toward it in Fr. Ripperger’s brief but exacting The Binding Force of Tradition (BFT).

The average faithful of a conservative or traditional mind, who has the goal of recouping and restoring the tradition of the Church not only in liturgy or in devotion but also in theology, often feels assaulted on all fronts by theologians and clergy who have forgotten that Jesus Christ is pre-Vatican II. Yet most books written by and for traditionalists on current miscellanea address effects of the problems in the Church today, or various facets of the problems around liturgy, doctrine, ecumenism and the like. None of the works out there go back to the very core of the problem, they do state the effects, namely the prior magisterium universally taught “x”, but today clergy, prelates and even members of the magisterium at least appear to be saying the opposite. The real question is what is the “Tradition”, and what principles have been deviated from that we should see the crisis in the Church not only unfold but continue?

Thankfully, we have at last, a clear and concise statement of principles on the tradition and our duties toward it in Fr. Ripperger’s brief but exacting The Binding Force of Tradition (BFT). At 55 pages it is not a lengthy read, but page after page is a clear laying out of principles. In fact, it could be rightly said that the strength of the work is in the very fact that it does not attempt to take up specific examples of teaching or practice which are, or at least appear, at variance with the universal Tradition. Instead, Fr. Ripperger lays out exactly what it is, where it comes from, what authority it has, what the misconceptions are, and what the duty not only of the lay faithful, but even more of the clergy is toward it. Better still, for the lay reader who does not have the benefit of formal orthodox training in philosophy and theology, is that it is a succinct read, well ordered and to the point. As Fr. James McLucas says in his Foreword to the work, “Father Ripperger utilizes the exacting scalpel of Thomistic precision to explain the problem and its solution.”

There are no reviews yet.